Today is my last work day before students come into the building tomorrow. Since I don’t have to share rooms, move rooms, or otherwise do anything over the summer, I can leave everything more or less how it is when I finish in May. I am a major creature of habit, but I did make a few minor changes this year and I just want to show everyone what my room looks like. It’s nothing fancy – I’m no pinterest fiend – but it’s functional. 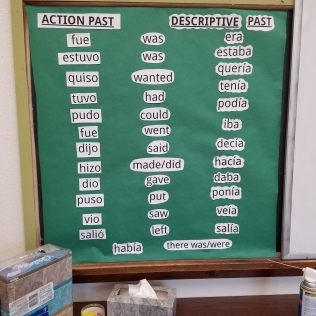 Ever since I switched to comprehensible input, I’ve had some version of word walls up. This is the third time I’ve done them and I hope the kids are nice to these, because cutting out all those words took a lot of time! (My prior versions were handwritten and I don’t have particularly nice handwriting.) A problem we also had in the past was that students couldn’t read the words when the lights were off, so I’m hoping that the white bubbles around black letters will help them stand out while still allowing for color on my bulletin board areas. (I also felt really proud of myself when I realized that with the whiteboard between the two word walls, I could use the green and red to make a Mexican-flag-like display.) 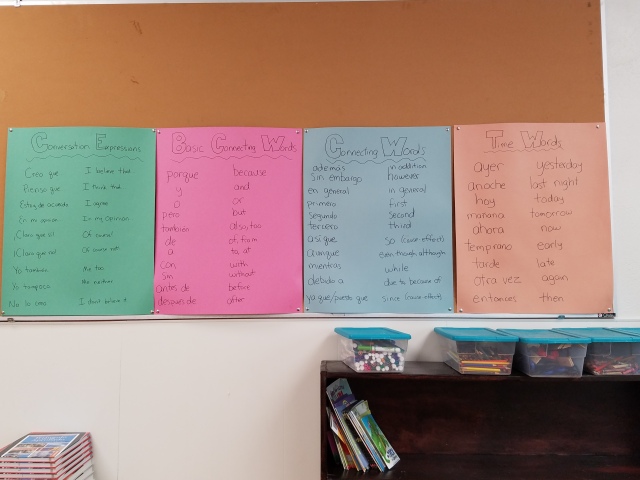 I put an image of this on twitter a while back, but I added the green poster last year. (See what I mean about the handwriting? I can’t write in a straight line to save my life.) These posters are super duper handy when pushing students into intermediate and helping them use connecting and organizational words in their speaking and writing. This year, I am considering adding a bunch of various nouns (with pictures) in that blank space above the posters as inspiration. Not in the sense that they’re inspirational pictures, but rather to help students if we’re trying to story-ask or write something and they can’t think of something interesting to happen in the story. Maybe animals or something that can function as both a character in the story or a prop – I haven’t gotten that far yet. 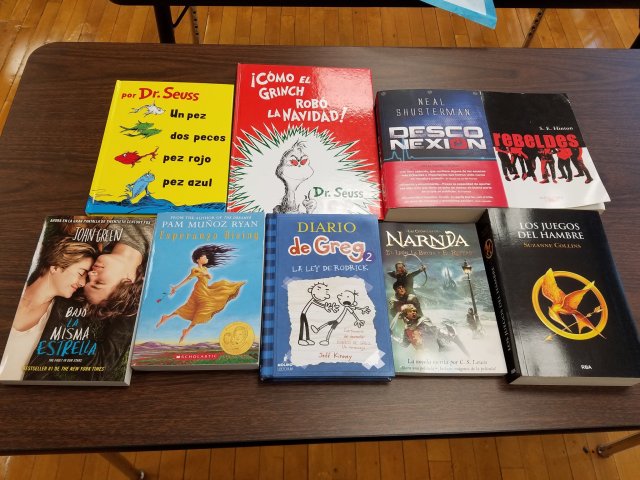 Most of these were either specific student requests from my end-of-year survey about the offerings of my class library or Spanish versions of popular books that I know my students like in English. I hope the students attempt some of the harder ones – I think that The Fault in Our Stars will be popular. I also got a handful of new novels from TPRS Publishing as well as expanding my collection of ones that were popular last year (Problemas en Paraíso and Rebeldes de Tejas, if you were wondering.) However, it seems that with every novel I buy, two more are released! But that’s a good problem to have, I think.

In the past, I have usually placed my tables in groups of 4 to facilitate easier pair work and conversation. This year, I decided to put the tables into a horseshoe shape. #1, it will be easier for everyone to see the whiteboard/projector screen comfortably. #2, students can still easily work in pairs or small groups. #3, nobody will complain about so-and-so kicking them from across the way cause their legs are too long. #4, I think a horseshoe shape works better for discussion and storytelling. #5, I can easily get to every student without having to navigate the narrow in-between-groups spaces. My projector is still currently on a cart but hopefully it will be in the ceiling by the end of the month, which will make things even easier for me.

The other big additions this year are more curriculum based. I decided as of yesterday to add the show Gran Hotel to my Spanish 3 and AP classes on Fridays. We run a shortened schedule anyway, and it’s a nice way to end the week. I am probably going to use the guides provided by Mike Peto and Kara Jacobs to help me out.

Reading and blogging are staying around for Spanish 3 and AP. I am seriously considering expanding FVR to my Spanish 2s, though in a more limited way. (We already read 2 novels in the year.) For reading, however, I am adding Martina Bex’s Mundo en tus manos news stories to my Monday plans. Between a short reading or two and weekend chat, my Mondays are set! (Mundo en tus manos is also a fantastic addition to any FVR library. Last year’s students felt they were an easy, comfortable read at level 3.)

We only have 24 minute periods tomorrow and 35 minute periods on Friday, so my plans are pretty simple. Due to the nature of my school, I know all of my returning students and I am pretty familiar with my incoming freshmen, so I get a VERY short honeymoon period. I think I am going to have ‘Relax’ by Sie7e playing as students come in. I love Sie7e because he’s got that chill summer vibe, and Relax is a very appropriate song for first-day Spanish students who are probably super nervous! I’ll say hi. Spanish 1 will do a simple me llamo/te llamas/se llama game and that’s all we’ll have time for. With the other levels, we will do a quick refresher on the syllabus and procedures, then maybe chill while listening to some favorite Spanish songs from last year. Day 2 is when I will hit that stuff with Spanish 1, and the other levels will do some conversational stuff about their vacation (or just listen to me ramble about mine which is also great). And that’s it. Nothing too fancy. Next Monday, we hit the ground running.

For funsies, I’ve included a copy of my EXTREMELY simple syllabus piktochart (again, not a lot to explain in a small school) and the image I use to explain the AP exam to my AP students. Feel free to use either of them in whole, in part, or inspirationally. 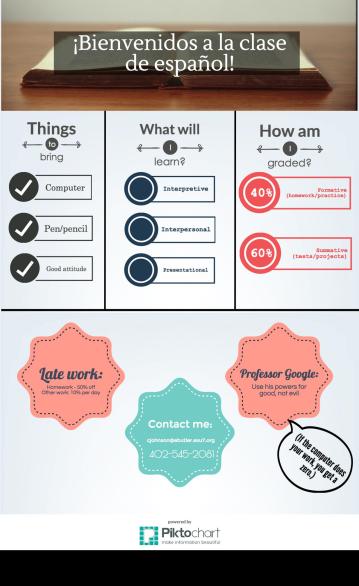 Hello, readers! I hope you are having a wonderful summer. For me, I’m down to the last week of vacation and decided I should probably catch up on some blogs. With the exception of my one tutoring session per week, I have managed to completely walk away from being a Spanish teacher and concentrate on being anything-but-a-teacher. I love my job, but thinking of Spanish education 24/7 gets pretty exhausting after 190 teacher days. I bought a house and discovered that I really enjoy gardening, even though I hate being hot, sweaty, dirty, or constantly attacked by bugs. Go figure.

I suppose this is when I should make some goals for this year or something, but instead, I am looking even farther to the future. The inspiration for this post came from something that Sara-Elizabeth recently shared on Musicuentos, the invention of the Babel Fish. She got a surprising amount of pushback on Twitter, because although she made me think about the topic (which is the point of blogs, right?)  I didn’t feel like she was attacking our profession. I have some disagreements, but I also think that she made an important point.

One thing that Sara-Elizabeth argues for is that Google Translate has gotten a lot better over the years. And it has. (I was in high school when the first internet translators appeared and I could only use them to get the gist of a passage.) However, I would argue that a practiced speaker of a language can still tell that it’s not normal speech almost immediately. For Spanish purposes, it will use the wrong past tense. It makes all ‘you’ into ‘usted’ even if the situation wouldn’t call for it. ‘Su’ is translated as ‘he’, even if the possessor is female. Every year, I have at least one student who writes ‘me gusta el partido’. A partido is a political party, not a fun-times party: that’s a fiesta. (And further baffling because seriously, who doesn’t know the word fiesta? I know they know it!!) In other words, translators are great for getting a basic message across… usually. I still wouldn’t trust one with say, my medical advice from a doctor. They’re still pretty terrible with slang, and they just can’t convey the same feeling, emotion, and flavor that a text does in its original language.

The other counterpoint I’d make is that, although I do believe teaching as we know it is going to disappear, I’m not overly concerned for language teaching disappearing altogether in my lifetime. It’s true that we finally have the first reasonably usable virtual reality headsets. (My friend has a VIVE and using it is really cool, but the user looks like a total dork.) My new phone has 70x more storage than my first computer from 1995. However, I am pretty sure I was promised a hoverboard and robotic cleaning servants by now. The so-called hoverboards that we have just catch fire and don’t even hover, and as for robotic cleaning servants, well…

So what I’m saying is… if we’re promised the technology by 2030, we’ll see some moderately usable form of it in 2050. I don’t know about you, but I plan to be retiring around then. The rate at which new technologies are created, tested, and applied can’t continue at a breakneck pace forever. On top of that, the biggest barrier is affordability.

Here’s the part where I agree 100% with Sara-Elizabeth: teaching as we know it is on its way out. I think traditional teaching methods where students are physically grouped into a building based on location are going to stick around much longer in urban areas, but in rural, less populated areas that are only shrinking… how much longer is it economically sustainable? When I started teaching at my school in 2010, I had a little over 90 students total. This year, I am currently sitting at 46. Our graduating class size, in just the last decade, has shrunk from about 30 to about 22. This year’s sophomore class only has 19 – assuming nobody moved over the summer. So it’s not that I’m scaring students off (in reality, I have far better retention rates than the Spanish teachers before me)… there’s just fewer kids to teach.

And that’s just the students. What about staff? I think that’s really the part that is going to be difficult. I work with a concentrated group of amazing veteran teachers. But in exchange for experience, I would say at least 1/3 of our staff is at or near retirement age, and I am honestly not sure what is going to happen if they all decide to leave at once. Who will replace them? Will we be able to get and keep quality teachers? What about the teachers who coach multiple activities? Our non-teaching staff is even more critical. I can’t imagine my school running without our three fantastic office ladies. We are in severe need of bus drivers and substitute teachers. It’s the typical small town scenario: everyone is aging out. Many of the kids are leaving and not coming back. It’s hard to face, but that’s the reality of the situation.

So, I worry. We can’t really consolidate our school anymore – we already encompass about 100 square miles. Some of our students live upwards of 20 miles away from our main building. I am pretty sure it’s just a matter of time before schools like mine disappear and are turned into online-only education. I am against that for kids for a variety of reasons, but if that happens, will there be a place for me? What would I do if I couldn’t teach Spanish there any longer? I have plenty of talents but… I like what I do now. I like my students. I like my coworkers. I don’t want that to change. But, and I think this is the whole point Sara-Elizabeth was trying to make, is that we need to be prepared when – not if – it does.